Yury Isaev, General Director of the Deposit Insurance Agency, talks about how to satisfy creditors’ claims and return to the economy assets previously taken out of circulation.

What is the Agency auctioning?

A bank building in Bolshoy Drovyanoy Pereulok in Moscow, with a total area of 2,310 square metres.
Rozovy Sad — a modern greenhouse complex in Kaluga Region which grows various types of flowers, including exclusive varieties of roses.
Skilfully made models of the sailing ships Amerigo Vespucci and Sovereign of the Seas.1637 as office adornments.

Why did you decide to discuss the issue of liquidated banks’ assets at the St. Petersburg International Economic Forum?

The authority of insolvency administrator was first conferred on the Deposit Insurance Agency by legislation in 2004. The Agency is now the insolvency administrator for over 300 banks and, as part of this work, sells assets with a net value of around 4 trillion roubles. The Agency also sells the property of a number of banks which were acquired as part of measures taken to ensure their financial rehabilitation.

The main aim of the Agency’s work with assets is to create the largest possible insolvency estate as a source for settlements to creditors. Currently, an average of 41% of creditors’ claims are satisfied, whereas in the Agency’s early days it was just over 4%. Our efforts have not gone unnoticed: the Agency was acknowledged as the leading insurer of deposits at the Annual General Meeting of the International Association of Deposit Insurers (IADI).

We studied international experience of working with assets and drew up our own proposals for improving the system. These were fully supported by the government and by the Bank of Russia. At the Forum, we plan to discuss these proposals with the business community and with our foreign partners and colleagues.

How do the Agency’s figures compare with world experience?

The figures vary greatly in different countries. In the USA, taking into account the transfer of assets and liabilities, the satisfaction rate is nearly 90%; in Mexico and Indonesia it is about 30%; and in Hungary, 18%.

Of course, we are not settling for the average claim satisfaction rate we have achieved so far, and are using every opportunity to increase it in the future.

How does the Agency actually sell assets?

The Agency sells the property of liquidated banks, non-state pension funds, and insurance companies, as well as assets acquired during the rehabilitation of Russian banks. Information concerning all saleable assets is in the public domain and can be accessed by any Internet user. All property being sold by the Agency — over 50,000 items — is displayed on the portal www.torgiasv.ru and on the Agency’s website. Anyone can take part in an auction — all you have to do is to complete a straightforward registration procedure and obtain a digital signature.

The most numerous category of bank assets sold by the Agency is the rights of claims against natural individuals, legal entities, and individual entrepreneurs. But the most popular category is equipment and real estate needed by banks throughout Russia to conduct their principal activity (ATMs, currency detectors, banknote counters, cars, office equipment, furniture, and so on). Buying them from the Agency is profitable: the purchaser receives high-quality goods at a discount.

The Agency also has more than 7,000 hectares of land under its control. There is currently farmland for sale in Tver, Pskov, Moscow, and Sverdlovsk regions, as well as in Moscow itself. 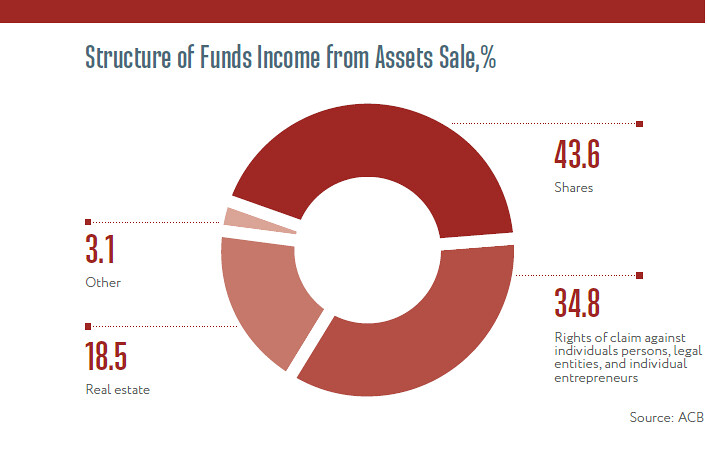 The current situation in the market is quite difficult. Will you be able to sell some of this land?

Yes, we will. Last year a major Russian agricultural holding company purchased several dozen hectares in Bryansk Region. A project to develop livestock farming and cheesemaking has been launched on land in Sverdlovsk Region acquired by the Agency (this is exceptionally important in the context of the import substitution programme in Russia) and a modern housing estate has been built on a plot in Novaya Moscow. So we can see that assets which were taken out of circulation are gradually returning to the economy.

When we organize auctions, we start from the premise that this is an important step towards attracting private investment into the economy of a specific region, creating new jobs, and increasing that region’s tax revenue. We work with regional authorities to find long-term investors to develop modern business projects. The Agency’s staff are always open to dialogue and ready to help with the selection of suitable premises.


What is the Agency auctioning?

• A bank building in Bolshoy Drovyanoy Pereulok in Moscow, with a total area of 2,310 square metres.

• Rozovy Sad — a modern greenhouse complex in Kaluga Region which grows various types of flowers, including exclusive varieties of roses.

• Skilfully made models of the sailing ships Amerigo Vespucci and Sovereign of the Seas.1637 as office adornments.

What other major assets is the Agency selling?

Do ordinary buyers — private individuals — get involved in the Agency’s sales?

We sell flats, residential buildings, garages, parking spaces, and unfinished construction sites in almost every region in Russia and, of course, in Moscow and St. Petersburg. Individuals buy mainly vehicles, as well as gold coins and ingots. They are also interested in furniture and office equipment. The advantages of buying from the Agency are the legality and transparency of the transaction and the gradual reduction in the price of the asset during the sales procedure.

And what are the results of your sales in monetary terms?

I repeat that the aim of the Agency as liquidator is the timely satisfaction of bank creditors’ claims in the largest possible sums. And that is where we will be concentrating all our efforts in the future. Cooperation with the Agency opens up a wealth of advantages for buyers: convenience of purchasing assets, buying at a discount and, most importantly, the opportunity to invest their money profitably. The Future of Industries: Where Are We Ahead, Where Are We Behind, and Why?
Eastern Economic Forum 2022
Import substitutionSupply chain managementEconomic progress
449 Research
Banking Sector Outlook for 2019: On an Upward Trajectory
Expert RA Rating Agency has produced a forecast for the development of the Russian banking sector in 2019. In the publication, the authors analyze rates of growth in assets, loan portfolio, profits, and profitability of the market players and assess external risks.
Banking Financial market
6621