“Promoting Investment In The Real Economy” In Russia, several development institutions have been established at both the federal and regional levels. But what role does Vnesheconombank play? What do you see as your main task?

Vnesheconombank is a unique development institution. We know how to structure large, complex projects in the high-tech and infrastructure sectors. Last year, for example, Vnesheconombank financed projects worth RUB 188 billion, and more than RUB 98 billion were allocated for the development of strategic industries. We are also actively engaged in the development of breakthrough technologies, and we are going to use these solutions in the economy and public administration. These combined competencies help us to play a dynamic role in the digital transformation of the Russian economy. We ourselves are changing rapidly, and we are helping to transform sectors of the real economy.

We have adjusted our approaches to working with the regions. We have set up a new team of regional managers who are proactively searching for investment projects.
Our work is guided by the state’s priorities and the objectives that the Russian President and Government assign to us. One of our key tasks is to facilitate investment in the real economy and to help create new, highly skilled jobs.

VEB has traditionally been widely represented at the St. Petersburg International Economic Forum. What messages would you like to convey at this Forum?

VEB is an active participant in all of the Forum programmes, including the business, exhibition, cultural, and youth programmes. We are organizing an exhibition together with the Hermitage that will demonstrate the partnership between contemporary artists and technology companies. These collaborations are built into the technological agenda promoted by the bank, including quantum technologies, technological convergence, and blockchain. We believe that innovation is born at the intersection of technology and art. And the artist’s perspective helps us to look beyond the horizon and glimpse the outlines of the future.

We are planning to discuss this topic (innovation as art) at our panel discussion with leading experts from the worlds of science, art, and technological entrepreneurship. I am confident that we will have an insightful and productive dialogue.

We are planning to present the Million-Rouble Idea, which we are producing together with NTV, on the Forum Youth Day. One of the objectives of the programme is to popularize technical creativity and bring the boldest ideas to life. The people behind breakthrough developments, regardless of which stage they have reached, are invited to participate in this project.

In addition, VEB’s stand at the Forum will give a broad overview of our current projects, ranging from digital transformation to concrete case studies in the regions.

How is the Project Finance Factory programme being promoted? Does it already include a lot of projects? Do you sense that there is interest from potential participants?

At present, key agreements have been signed for the first project pool, representing a total of RUB 180 billion. We signed agreements with eight banks to co-finance projects within the Factory programme: Sberbank, VTB, Gazprombank, Eurasian Development Bank, Russian Regional Development Bank, Sovcombank, International Investment Bank, and ZENIT. I am confident that our circle of partners will continue to expand.

And it is not just Russian banks that have expressed an interest in the Factory: major foreign financial institutions that are active on the Russian financial market are also keen to participate. Project initiators have also paid a great deal of attention to the Factory. The main idea behind it is to provide syndicated lending for projects by raising state subsidies and offering state guarantees on bonds. This mechanism will minimize risks for investors at all stages. VEB expects that each rouble invested will attract three or four roubles in additional investment in the country’s economy. We already see great potential for launching a fully-fledged investment pipeline.

Currently, we have set our sights on projects that are worth hundreds of billions of roubles in such sectors as infrastructure (roads), chemicals, and municipal solid waste processing.

The government has approved a road map for infrastructure loans. Does VEB plan to take part? Has some progress already been made?

The road map itself was approved by the Government in March, and work is only just beginning. This is a mechanism that is used to actually build an infrastructure facility using borrowed funds raised from private investors. The users of the facility gradually repay the loan over time. This approach can help to raise additional capital for infrastructure construction right now. Thus, it stimulates additional economic growth.
According to the road map, Vnesheconombank is the associate contractor for a number of parts of the project. We will help to prepare the relevant regulations and guidance documents, and we will be involved in implementing pilot projects. In our opinion, this programme has the potential to cover a large number of areas. One promising proposal is to use this mechanism to finance socially significant facilities within the framework of a public—private partnership.

The strategy of the renewed VEB pays a lot of attention to supporting innovation, including blockchain technology. Which of Vnesheconombank’s initiatives are helping to develop this area in Russia?

Last year, we set up the Blockchain Competence Centre or ‘Blockchain Commune’. This is an ecosystem for companies that are implementing developments based on distributed ledger technology. The VEB Centre provides them with guidance and other expertise. We also finance those pilot projects that others may be interested in replicating on a national scale.

Vnesheconombank does not have its own staff of developers. We connect resident companies of the Commune, which today number more than 30, with various projects. The Centre is currently developing solutions for oil trading companies, utilities and communal services, energy sales, insurance, and other areas.

For example, in April, together with the Government of Novgorod Region, we launched a project to monitor the circulation of subsidized medicines using blockchain technology. This is one of the first such projects in the world.

Recently, a new initiative has emerged at the Blockchain Commune: the Legal Lab, which provides a space to explore legal practice. Cooperation agreements have been signed with partners from Switzerland, Kazakhstan, and Belarus, which are actively seeking to develop cryptoeconomy regulations. We expect that the Legal Lab will become a platform for discussing strategic approaches to the regulation of the digital economy as well as a centre for developing a number of specific projects. These projects include, for example, the creation of an interstate regulatory sandbox in the blockchain as a service field, a tokenization project to facilitate trade between the member countries of the EAEU, and models for the digitalization of the customs system. The Blockchain Competence Centre plans to expand cooperation with expert groups at international organizations, including the OSCE, BRICS, APEC, and ASEAN.

In your speeches, you have noted that other areas, including technological convergence and quantum technologies, are strategically important for the country. What is VEB’s role in the development of these technologies?

As a development institution, we believe that it is important for Russia to determine a technological priority and to establish niches where it can become a leader. Quantum technologies, technological convergence, artificial intelligence, and blockchain are very promising directions. There is no clear leader yet, and the countries that will win this race will be those able to effectively translate their technology leadership into their own economic growth. For example, quantum technologies today are the focus of attention of many nations, including China and the United States.

VEB supports several projects in this area. We partner with the Kurchatov Institute, with which we are preparing joint initiatives to develop infrastructure, and we are seeking ways to provide systematic support for young scientists. This year we will launch a fund to support technological convergence. The goal of this project will be to commercialize the developments of the national research centre.

Another of our initiatives in this field is our consortium with Moscow State University, the Russian Foundation for Advanced Research Projects in the Defense Industry, and Tsifrovaya Ekonomika to create a 50-qubit quantum computer. The goal of the consortium is not only to create equipment, but also to find a practical application for this equipment, primarily in materials science.

This year we plan to open world-class competence centres to support technological convergence and quantum technologies. VEB will actively cooperate with the executive and legislative branches of the government, as well as with market participants, to improve the regulatory environment. After all, a new technological breakthrough cannot be achieved without transforming the regulatory framework that will allow these technologies to be used. We understand this from the experience of our own pilot projects, and we see great potential for a breakthrough. Russia has everything in place to achieve this. 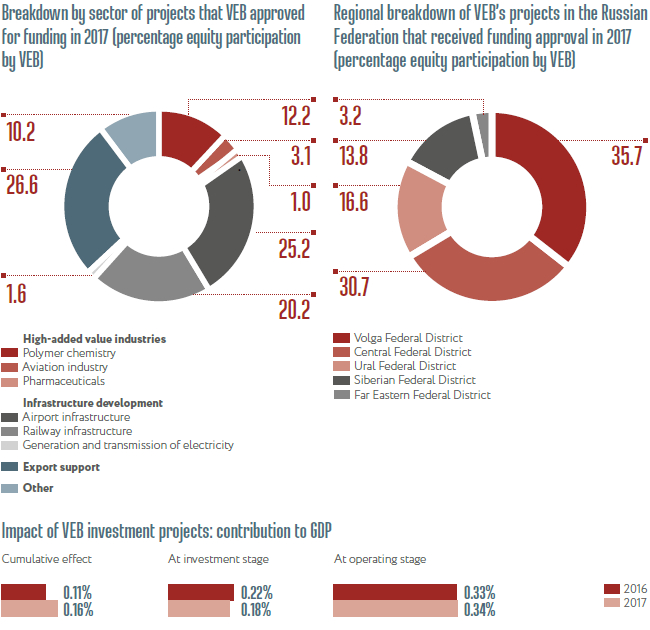 Research
Information technologies. Where do the state's and the companies' interests meet?
In this publication, InfraOne Research analysts assess the current state of the IT market, explore its growth prospects, and speak about possible future projects.
IT industry Public Private Partnerships Digitalization
4676