Japanese Minister of Economy, Trade, and Industry Hiroshige Sekō is the man directly responsible for developing economic relations between Japan and Russia. As a frequent visitor to our country, he shares his views on the prospects for economic cooperation with the Russian Far East, and on Japan’s priorities in the region.

The 8-Point Cooperation Plan is being updated as we speak

— 2018 has been designated a ‘crossover year’ for Russia and Japan. What does this mean for economic relations between the two countries? — This is the first year in the history of Japanese—Russian relations to be declared both the Year of Russia in Japan and the Year of Japan in Russia. The plans for this ‘crossover year’ were announced as one of the outcomes of Russian President Vladimir Putin’s visit to Japan in December 2016 as part of efforts to expand humanitarian contacts. The aim of the year is to achieve a deeper mutual understanding between our two peoples, through fundamental expansion of people- to-people interaction. The Japan- Russia Year encompasses a wide range of areas beyond culture alone. Economic issues in particular have been identified as an important area for cooperation.

As part of the Year of Japan in Russia, Japan took part in the St. Petersburg International Economic Forum as a guest country in May 2018. I myself participated in the Forum, alongside Japanese Prime Minister Shinzō Abe. In the course of the Japanese—Russian business dialogue, the leaders of both countries and leading business executives were able to engage in an open exchange of opinions on how to realize the potential of bilateral economic relations.

In addition to this, other important events are being held which are contributing to the implementation of the Eight-Point Cooperation Plan, including the opening of Hokuto Rehabilitation Centre in Vladivostok, launch ceremony of a new production line at a Takeda Pharmaceuticals` plant in Yaroslavl, and business seminars devoted to urban planning in Russia. I hope that the events of the Year of Japan in Russia and the Year of Russia in Japan will activate exchanges in the economic field and thus strengthen Japanese—Russian economic relations.

— What is the status of these relations at the moment?

— The Eight-Point Cooperation Plan is being materialized. The plan was proposed by Japanese Prime Minister Shinzō Abe at a summit meeting which took place in May 2016 in Sochi. The main purpose of the plan is to use Japanese technology and experience that allow Russian citizens to feel for themselves how their lives are changing for the better. For example, significant results have been achieved in extending healthy life expectancy and in creating a pleasant urban environment, including by reducing traffic congestion. These achievements make a direct contribution to the enhancing of the living standards of Russian citizens.

During the meeting in May this year, the two leaders welcomed plans for around 130 projects created by private companies. Tangible actions have already begun on approximately half of these.

Work is also progressing on the creation of financing systems which will provide support for the Cooperation Plan, including a joint investment mechanism from the Japan Bank for International Cooperation (JBIC) and the Russian Direct Investment Fund.

The creation of a rehabilitation centre in Primorsky Territory was first discussed at the Second Eastern Economic Forum in 2016. The Hokuto Centre opened less than two years later, on 16 May 2018, as one of the projects under a Japan—Russia economic cooperation plan. Investors in the project include the JGC Corporation and Hokuto Social Medical Corporation. The medical facility specializes in patient rehabilitation following major injuries, surgical procedures, and strokes. Alongside traditional methods such as manual therapy, the facility also makes use of the latest developments, including exoskeletons and modern fitness equipment. The facility is able to receive around 100 patients every day.

As the minister responsible, I have been endeavouring to demonstrate as many concrete results as possible from the Cooperation Plan, including new projects at the East Economic Forum. I would also like to make it more ambitious still, including with respect to the themes to be discussed at the Forum.

— What do you think about the changes taking place in the Russian Far East? How do Japanese companies and investors assess these changes?

— Thanks to advanced special economic zones (ASEZs) and the Vladivostok Free Port regime, a number of Japanese companies active in the Russian Far East are enjoying a range of incentives, including tax benefits. Their assessment of efforts on the Russian side is positive.

At the same time, Japanese companies do not currently have sufficient information about business and systems in the Russian Far East. In March this year, a presentation was held in Tokyo with the aim of facilitating investment in the Russian Far East. More than 130 people attended and frankly exchanged their opinions. I also welcome the opening a Tokyo Office of the Far East Investment and Export Agency. I expect the Russian side to be more active in providing information to Japanese companies and investors.

The Japanese Government is placing a great deal of emphasis on cooperation in three areas: developing agriculture, forestry and fishing in the Russian Far East; improving infrastructure to create an export base; and developing energy. In February this year, JBIC created a company in the Russian Far East with the purpose of promoting joint Japanese—Russian investment in the region. Contracts have already been concluded with Japanese companies to provide mediation and advice with associated procedures. In July this year, a joint delegation of government officials and business representatives visited Primorsky Territory and Amur Region to discuss cooperation in the agricultural sector. In addition will continue to support efforts to expand cooperation in the Russian Far East. 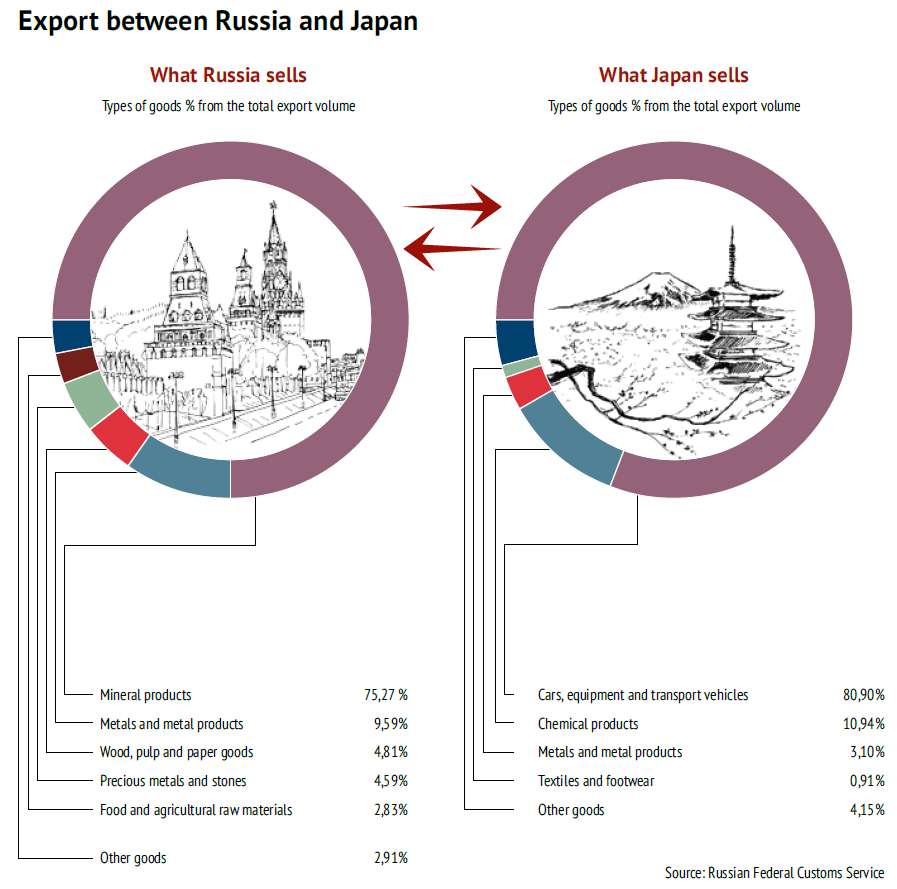 — What projects in the energy sector are of the most interest to Japanese players?

— Considering Russia’s enormous resource potential and geographical proximity cooperation in the energy sector is important for diversifying the sources of Japanese energy imports and ensuring stable supplies. As Prime Minister Abe noted in his address at the St. Petersburg International Economic Forum, we envisage the development of mutually beneficial relations between Japan, which is the world’s largest importer of LNG and possesses extensive experience in shaping markets and developing pricing mechanisms, and Russia, with its enormous resource reserves. More information is needed about the Russian market

— In an interview with Tatsuo Yasunaga, the President and CEO of Mitsui and Co., in the St. Petersburg International Economic Forum magazine, noted that approximately 200–300 Japanese companies are presently active in Russia, whereas there are 32,000 Japanese companies doing business in China. What can Russia do to attract Japanese small and medium-sized businesses?

— Japan is a global leader in the technology sector. Russia is also devoting considerable efforts to developing its digital economy. Does Japan have any experience and approaches which Russia can adopt?

— As part of efforts to strengthen cooperation between our two countries in the digital economy, I signed a joint declaration on cooperation in the digital economy with Minister of Economic Development and Special Representative of the President of the Russian Federation for Trade and Economic Cooperation with Japan Maxim Oreshkin in September last year, following which we developed a joint plan of action in May this year. We are using various meetings and events to work on a number of joint projects together.

As part of the Eight-Point Cooperation Plan, Japanese companies in possession of highly advanced technologies are working on further improving the lives of Russian citizens via a number of digital projects, including systems to assist with remote medical diagnosis and the implementation of high-tech traffic light systems.

Japan enjoys advantages in the manufacturing sector of the economy based on its wide-ranging technological capabilities. As Digitalization and the Internet of Things, and artificial intelligence are expanding, Japan is working to improve competitiveness in this way, and is promoting the concept of Connected Industries, which aims to create new values and solve social challenges by linking different kinds of activity, companies, people, machines, and other facilities, and at the same time, to my knowledge, Russia, where a Digital Economy in the Russian Federation programme is being promoted, is home to world-class artificial intelligence developers. The country possesses significant technological capabilities in the fields of software and information security.

Japan and Russia have potential here to establish mutually beneficial relations, and to achieve new economic growth and cooperation by making use of their existing advantages in these areas. I would like to continue working on strengthening cooperation on digital economy projects. Higher Education in the East: A New Quality of Teaching
Eastern Economic Forum 2022
Far EastInnovation infrastructureEducation
459
Analytics on the topic

Expert opinion
The Russian Far East ever gotten this unding before
On the eve of EEF 2019 , Alexander Kozlov , minister for the development of the Russian Far East and the Arctic, sat down with us to discuss the results of the past few years and went into detail about the ministry ’ s plans for the near future.
Alexander Kozlov
The Arctic Far East Regional Policies Standards of living
6919 Article
Asia-Pacific as a new zone for global market growth
The global economy is disintegrating into two separate projects: the West and the East. Financial globalization (the Western project) requires a uniform standard for decision-making, whereas industrial globalization (the Eastern project) requires the joining together of diverse interests on the basis of agreements.
Asia-Pacific region Far East Protectionism Trade policy SCO
8166

Expert opinion
A European city with an Asian mentality and a profoundly Russian soul
Vladivostok is welcoming guests to the Eastern Economic Forum for the fourth time. What does the capital of Russia’s southeastern coast have to offer investors? Vladivostok’s Mayor Vitaly Verkeenko talks to us about the city’s history, its present-day role, and where it is headed.
Vitaly Verkeenko
Asia-Pacific region Far East Free Trade Areas (FTA) Trade policy
7377