The St. Petersburg International Economic Forum will be attended by representatives of sovereign wealth funds and institutional investors from many countries. Their joint projects with Russian capital are an integral part of an economy of trust that will be discussed in line with the Forum’s business programme. Kirill Dmitriev, CEO of Russian Direct Investments Fund, tells why it is worth investing in Russia now.

Which questions do you plan to discuss at the St. Petersburg International Economic Forum?

The St. Petersburg International Economic Forum has become one of the main global platforms to discuss issues of major importance for the global and Russian economy. This year, as in previous years, we have invited our partners from the leading sovereign funds and institutional investors from China, Japan, Saudi Arabia, the United Arab Emirates and other countries to take part in the Forum. The Forum is a platform for us to discuss opportunities that will arise in the Russian economy over the next few years for our partners and how to prepare for an «investment breakthrough», an essential condition for the country to transition from sustainable economic growth to an accelerated development trajectory. We also want to present new investment ideas to our partners, specifically high-tech projects that will soon account for about a quarter of our portfolio. We will also speak about opportunities in infrastructure construction and healthcare.

Following the Forum, we plan to sign new investment agreements with partners from Asia, Europe and the Middle East. For the first time RDIF will hold an exhibition of its portfolio companies and we invite all guests of the Forum to visit RDIF House to see how the 1.2 trillion roubles of investment from the Fund and its partners has helped to create new production facilities and jobs.

How would you estimate the current level of mutual trust between different countries and business partners in the world?

Unfortunately, the level of trust between Russia and other key players, such as the United States and many European Union countries, is at historic lows. This significantly reduces the opportunities for business and trade development. However, thanks to Russia’s consistent and open policy, overall, its standing in the world is growing. This standing helps create new partnerships and achieve impressive results. An example of such cooperation, in which Russia played a leading role, is an agreement to cut oil production between the OPEC and other oil producing countries. This agreement helped stabilize global markets and preserve oil pri­ces at levels suitable for the entire global economy.
Another example of building relations based on trust was the visit by the King of Saudi Arabia to Moscow, during which RDIF signed agreements for the creation of investment platforms worth over 2 billion US dollars.

During its six years of existence, RDIF has created more than 20 strategic long-term partnerships with foreign sovereign and investment funds and leading companies. The cumulative value of investments by the Fund and its partners has exceeded 1.2 trillion roubles. Today, investments by RDIF and its partners account for over 90% of the total direct investment market in Russia and for over 50% of the venture investment market. The Fund’s portfolio has achieved an average annual return of 15%. Our successful income-generating transactions serve to strengthen Russia’s positive investment image, its international standing, and the trust that defines its relations with other countries.

How significant is the impact of political risks on the strategy of sovereign investment funds?

In a rapidly changing environment, it is impossible not to consider the geopolitical factor while building investment strategies. At present, geopolitics is certainly creating new risks. However, you need to identify areas of common interest, irrespective of the geopolitical situation, and focus on the implementation of quality projects capable of yielding high returns. In the current context, sovereign funds play an important role in building relations between countries. We see it through our relationship with the sovereign funds of the Middle East, where the level of trust is already so high that our partners automatically invest in the projects we have reviewed and selected. For our international partners, we act as an «investment filter», through which only first-class, thoroughly prepared projects with minimal risks can pass. As an illustration of this trust, the sovereign fund of the United Arab Emirates has already joined us in more than 40 such projects.

Over the last year, which factors have increased Russia’s attractiveness to potential investors?

The macroeconomic stability of the Russian economy became the key driver behind the country’s growing investment appeal. International investors appreciated record low inflation rates in 2017, accompanied by the consistent decrease of the key interest rate by the Bank of Russia and a stable currency exchange rate. This opinion is supported by the increase in Russia’s sovereign rating — which enabled opportunities to implement dozens of new projects — as well as Russia’s leading positions in several established rankings. For instance, last year Russia outperformed China in the Bank of America Merrill Lynch rating of emerging economies, placing second after South Korea. In 2018, the country also joined the top ten most attractive countries for investments based on PwC’s annual global CEO survey. Our partners mention the efficiency of the economic policy implemented by the Government and Bank of Russia, and consider it both reliable and consistent.

In his Address to the Federal Assembly, the President mentioned the importance of investments to establish a trajectory of accelerated economic growth, increase the quality of life for the country’s citizens, and achieve a technological breakthrough. Within the next six years, the Fund intends to focus on the implementation of the missions set out in the Address by attracting our foreign partners’ ‘smart’ capital into the country. The return on investment always remains an essential factor for us.

The Fund has defined six priority investment areas. These are infrastructure, technological development, efficiency growth, import substitution, regional development, and improved quality of life for Russia’s citizens. In the area of technology, RDIF has already announced investments in several exciting projects, e.g. in Doctis, the Russian leader in telemedicine, together with our partners from Japan. We will announce several new agreements at the Forum in St. Petersburg. We believe that the Russian healthcare industry will also become an area of growth. The Government budget for investments in healthcare alone will double and reach 4–5% of GDP. Projects based on public-private partnerships in healthcare will become common and will be highly attractive for private investors.

We believe that within the next few years Russia will turn into one of the fastest-developing and exciting markets in the world, and we invite international investors to share this success story with us. 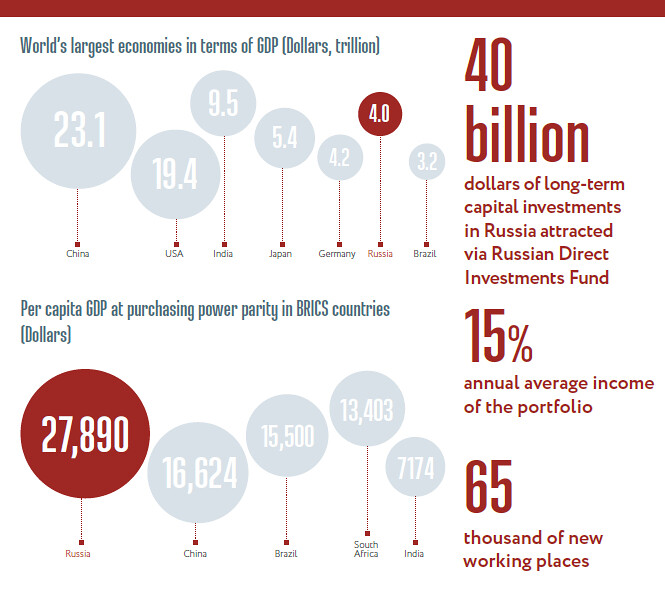 Research
Russian–Chinese Dialogue: The 2019 Model
The fifth issue of the annual report, prepared jointly by the Russian International Affairs Council (RIAC), the Institute of Far Eastern Studies of the Russian Academy of Sciences, and the Institute of International Studies of the Fudan University, offers the shared vision of Russian and Chinese experts in international affairs for continued collaboration between Russia and China in 2018 and the first quarter of 2019.
Investment climate Entrepreneurship Foreign direct investment
4799 Article
The Far East: New Challenges And Opportunities
The pandemic has sent shockwaves through the global economy, and has delivered a clear message to all nations: there can be no future without international cooperation, digitalization, and high-quality healthcare. It is not enough to possess rich reserves of natural resources — steps also need to be taken to boost investment initiatives and enact positive social change. Today, these aims are beginning to be fulfilled with the introduction of advanced special economic zones and other incentives in the Russian Far East.
Far East Investment climate Innovation infrastructure Entrepreneurship
5200